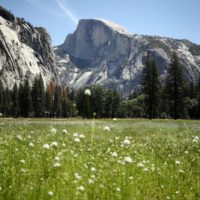 Yosemite’s concessionaire boss is out of a job after he was seen in a video driving golf balls at Half Dome.

Aramark corporate spokesman David Freireich said Michael Grisar, vice president of operations at Yosemite, is no longer employed by the company, according to the Modesto Bee.

Grisar was seen driving golf balls in Ahwahnee Meadow, a protected area, in a video posted to Instagram by his wife, Fox 26 News reported. The video has since been removed but only after at least one Yosemite employee recorded and circulated it.