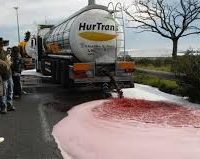 A California wine lover got really cork screwy by quenching his thirst from the valve of a truck hauling wine down a busy highway.

Gabriel Moren pulled alongside a truck that was hauling red wine last Tuesday afternoon and signaled the driver that something was wrong with the big rig. The trucker took Moreno seriously and pulled onto the shoulder, giving the 39-year-old a chance to leap out of his own car and run over to the back of the truck to help himself to some of the cargo.

Morano, who was wearing nothing but his tighty whities, jumped into the back of the vehicle and unscrewed the pumping valve, guzzling some of the vino and letting gallons of it spill into the truck bed. A highway patrol spokesperson said, “He was lying on the ground and doing snow angels, basically, as the wine was pouring down on him.”

The truck lost about 1,000 gallons of wine during the incident, according to Cherokee Freight Lines. (Newsweek)