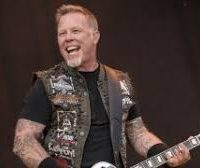 James Hetfield of Metallica announced his first public appearance since a stint in rehab.

Hetfield will appear at the opening of his car collection at the Petersen Automotive Museum in Los Angeles on January 30th. The event will feature a “fireside” chat with Hetfield along with an auction of two of his limited-edition ESP guitars.

Metallica announced that Hetfield was checking into rehab on September 27th and the frontman has stayed out of the public eye since completing the stint.

Metallica guitarist Kirk Hammett was in London’s Abbey Road Studio last week laying down guitar parts for the new album by Fleetwood Mac founder and guitarist Peter Green. He played his 1959 Greeny Gibson Les Paul, which was once owned by Green. Hammett showed the guitar to Green who hadn’t seen it in 47 years, having sold it to Gary Moore.

It was a pleasure to have @KirkHammett from @Metallica in our Front Room studio this week, recording guitars with producer Rob Cass and Abbey Road engineer Chris Bolster.