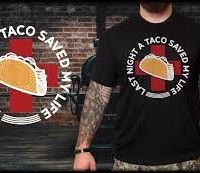 An Arizona man says he might’ve fallen victim to a shotgun shell — if he hadn’t been focused on his taco shell.

Ryan Bishop feels lucky to be alive after a bullet hit the driver’s side window of his car while he was on the road — a window that was rolled up only because he was chowing down on some Mexican food. He says he was tooling down a Tucson street when he heard a pop and felt his window shatter, leading him to pull over and inspect the damage, which appeared to be caused by gunfire.

Bishop said he normally drives with his windows down and his arm on the window ledge, but notes, “I had the window closed because I didn’t want pieces of the taco flying around. I’m pretty sure [eating a] taco saved my life or at least stopped my arm from getting blown apart.” (KOLD-TV)