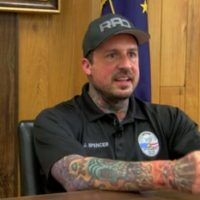 Spencer was voted the “Best Drummer of 2015” by Loudwire, but Sunday he put down the drum sticks and traded them in for a police badge.

At 19-years-old, Jeremy Spencer left his hometown of Boonville, Indiana.

“I’m kind of relearning where things are in my house now. Like where the cups are, you know, because I was gone. It’s been really cool to just kind of do a normal situation for a while,” said Spencer.

In 2005, Jeremy became the drummer of Five Finger Death Punch, a metal band that’s known all over the U.S.

“It was amazing and it brings back memories watching it now. I kind of remember some of these shows and it’s very cool,” said Spencer.

Just at the end of 2018, Jeremy decided to walk away from the band and Sunday, he was sworn into a different one.

“I’m basically taking what I did in the band and just applying it to this, and trying to do the best I can,” said Spencer.