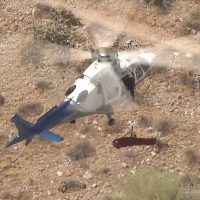 A woman in her 70s was injured during a hike in the Phoenix area on Tuesday and needed to be airlifted to safety. But the rescue didn’t go according to plan….

“Sometimes when we bring the helicopter up from the ground, [the basket] will start to spin,” Paul Apolinar, chief pilot in the Phoenix Police Department’s Air Support Unit, said.  “We have a line attached to the basket that’s supposed to prevent that. Today it didn’t.”

The pilots attempted to lower the basket, which slowed the spin, but as they brought it back up again the spin returned. Eventually, they were able to transport the unidentified woman to safety.

She suffered a facial laceration, wrist and hip injuries and possibly a fractured nose while hiking, The Arizona Republic reported. According to Fox 10 in Phoenix, the spinning rescue only left her dizzy and a little nauseous.

None of the rescuers were injured, but what a day for that woman!!! Woke up feeling adventurous and landed in a death hike that ended in a rescue mission from hell!
Read on here
Subscribe