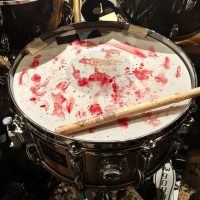 Last year, COREY TAYLOR described the new music SLIPKNOT was working on as, quote, “just so hard and dirty fast”  He also said one track on the album might be the band’s heaviest song yet.

Well, over the weekend, drummer JAY WEINBERG posted a picture of his snare . . . COVERED IN BLOOD.  He captioned it, “In case you’re wondering what kind of album we’re making.”

The album is due out around mid-year.  (Loudwire)