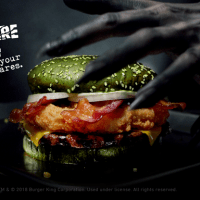 They have a new sandwich coming out on Monday called the Nightmare King.  Basically, it’s a chicken sandwich with bacon and cheese . . . but the “Halloween” aspect is its GREEN BUN.

And this isn’t just any green bun.  Apparently BK teamed up with some researchers who ran a study and found that when people ate the sandwich, they had three-and-a-half times more nightmares than normal.

Now, the big question is:  Will one of those nightmares have to do with the color this sandwich turns your poop?

Burger King is already selling a black Fanta slushie for Halloween, and there are reports that it’s been turning people’s poop all sorts of strange colors . . . which is also what happened with their burger with a black bun a few years back too.

Will the Nightmare King join in on that legacy?  We’ll all know soon enough . . . green poop is something people just LOVE talking about on social media.  (Delish)